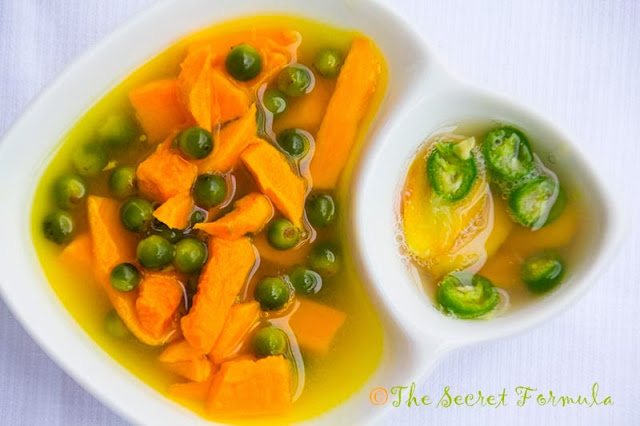 Golden Yellow goodness in all its glory.

Like most any other Indian I know, I’ve grown up accustomed to having a lot of turmeric in my diet. It’s used in nearly every dish!

Usually though, the form in which I see it everyday is the dried and powdered version.

Fresh turmeric, on the other hand, (see here for more on this rhizome),  is not as common outside the actual growing areas, but delicious alternative when available – as it can easily be, if grown at home!

Turmeric leaves are also used as a wrap in cooking, wherein they impart a distinct flavour to the dish being cooked, and are the bonus for growing your own.

Haldi, or turmeric, has a very distinct, rather pungent taste, that is so unique in fact, that there is a dedicated word to describe it in Hindi, which is “haraandh” or “hariyaand” (हड़ान्द or हड़ियान्द).

I don’t know if an English equivalent exists.

Toss in too much of the lovely yellow powder in your daily dal or curry, and folks will start giving it a miss, because of the “haraandh” being too strong!

Although individual tolerance thresholds might vary, and some cuisines use more than others, by and large, there is a pretty well-defined balance of taste and colour that dictates how much is to be used.

This relish though, is as concentrated as it can get. So be warned, if you have a sensitive palate, – its flavour is very intense! 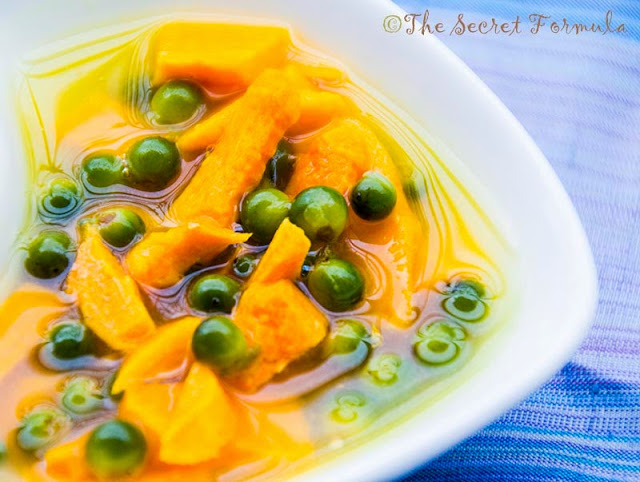 When I harvested my first batch of potted turmeric, I wanted to make a million things with the delightful yellow rhizomes. Given the limited stock, some of those I was able to, but some had to wait.

Almost the very first thing that I thought of, and subsequently made, was this relish which is just about as simple as the previous one using aam-adrak (mango ginger).

That was nearly two years ago.

Though I haven’t grown any more turmeric in the interim, I’ve been buying it whenever it’s available.

If you are in Bangalore, just check with your local vegetable vendor, for fresh turmeric and fresh mango-ginger, although it may not be organic, but it may just be available! Save some for growing!

Recently I came across some organic fresh turmeric and stocked up again. It stores pretty well in a plastic bag – just like ginger, at room temperature, where it will slowly dry up; or in the fridge in a partly air-tight box to make it last longer.

This time, I also had on hand a few stalks of fresh green organic peppercorns, that I had got to make another pickle, and had been storing in a jar of water in the fridge to prolong its life.

These are very perishable, and usually preserved in brine or vinegar. But since the ones I had were freshly picked from the vine, I tried to delay the inevitable blackening process like this till I managed to make the pickle. 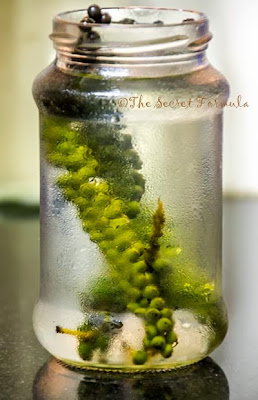 See how the part that’s sticking out of the water has turned black! 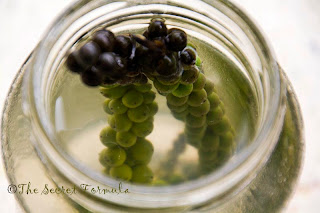 (I should have used a bigger jar, of course, and saved those few peppercorns too!)
Sadly, this is not how the peppercorns easily turn into black pepper, that is a whole different process altogether involving fermenting, drying and lots more work.

Coming back to where I was, two thoughts instantly came to mind!

Or, make that three –

1.   Green pepper is often preserved in brine or with salt and lemon juice in a similar sort of relish as the turmeric that I was going to prepare.

2.   A recently picked up factoid that black pepper (Piper nigrum) massively enhances the bioavailability of turmeric (something like 2000 times, according to some reports!)

After that, this relish pretty much invented itself.

Fresh turmeric – 1 or 2 pieces (I used two)
Fresh green peppercorns (optional) – few (I used half a stalk)
Fresh lemon juice – lots, – pieces need to be submerged (I used a ripe and juicy one)
Salt – to taste 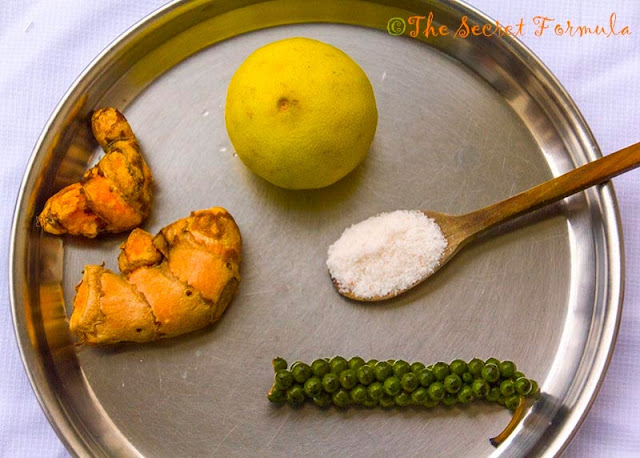 1. Scrape the skin off the turmeric, and 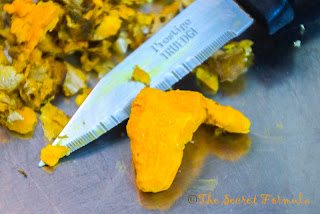 2. chop into slivers (or slices, or grate) 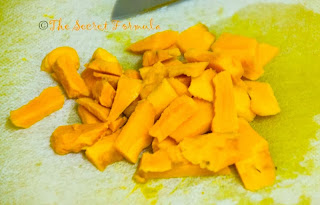 Note:
–   Be prepared for yellow stains that won’t wash away easily from hands. Or wear gloves.
–  If clothes or utensils (especially plastic, though why should you be using those) get stained try leaving them out in the sun for a while, as the colour is fugitive to sunlight.
(Personally, I don’t mind the yellow hand stains, indeed there are other times too, when hands get yellow from using turmeric and stay like that for a couple of days. Turmeric has very strong associations with health and rituals in India, besides in the kitchen, and I love it’s fragrance and earthy yellow colour.)

2.  Next, de-seed the lemon and extract the juice (or, use a strainer to catch the seeds.) 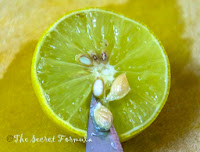 Tip: – If you are removing the seeds with a knife, holding it up against the light will reveal any further “hidden” seeds that need to be ferreted out. Like so.

3. Break off the green peppers from the stalk 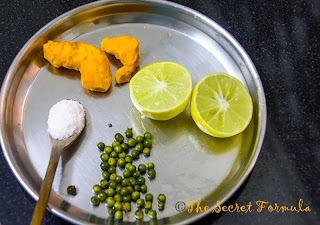 4. Mix everything together. That’s it, it’s done! 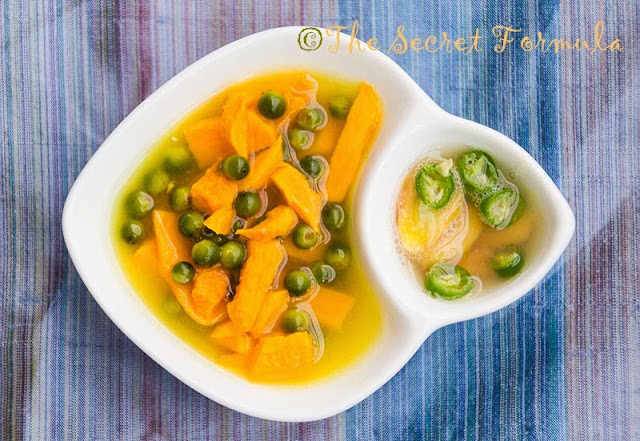 Are you wondering about that other combination on the right pictured above?

As a kid, I couldn’t imagine why anyone would want to torture their taste buds with something like that! But now it’s one of my favorites. Adulthood is sneaky, that way.

Did I say that the flavour of turmeric-pepper was intense?
Well, this one – ginger-green chillies takes “intense” to a whole new level. 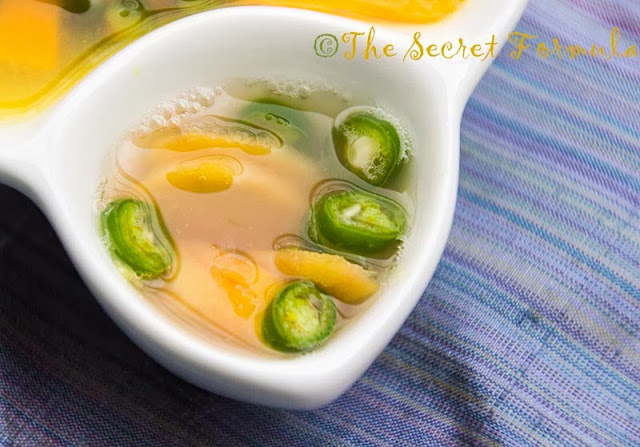 Best enjoyed with a hearty meal in minuscule portions (or as much as you can handle!)

The liquid from both versions, make for a great tart and flavourful addition to curries or gravies or salad dressings.

Do a taste check for salt. Ensure there’s plenty of lemon juice to cover all the pieces; add more if required.

Store either version, or both, (seperately, or mixed) in a glass container in the fridge.

This ought to keep for several days, – weeks, even.

Mine usually gets consumed before the week is over since I make small batches.

But from past, I remember that (turmeric, at least) keeps well for quite long. The green chillies, just a few days.

This relish is commonly used in Gujarati cuisine where it is known as Amba Haldar.

Considering that turmeric, lemon juice and salt are all used as preservatives in most pickles, it figures!