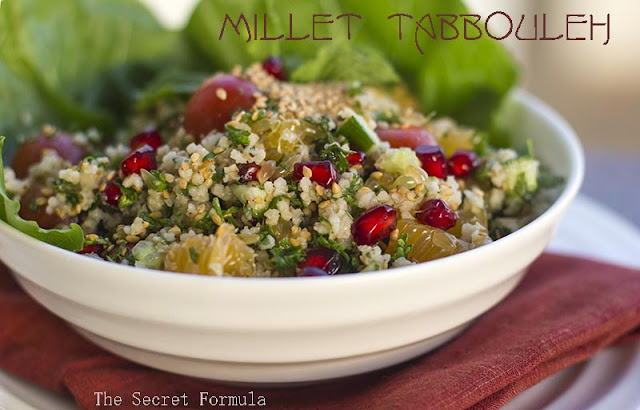 A simple, delicious herbaceous salad, combined with the goodness of fresh fruit and crunchy veggies in a dressing of lemon juice and olive oil.
The addition of toasted sesame seeds provides an interesting, nutty note.
Since Little Millet, or Sama is generally regarded as permissible food during fasting, this tabbouleh is ‘farali’ or ‘phalahari’, and can be had during fasts in most cases (like during the Navaratri days).

Note: To cook any millet, rinse (and soak the grains for at least 20 minutes or longer, to improve nutrition and texture) and then boil in a pan with 2 to 3 times the water by volume (depending on softness desired), or pressure cook (like rice) two whistles. Leave covered for 10 minutes, then fluff grains with a fork before using. 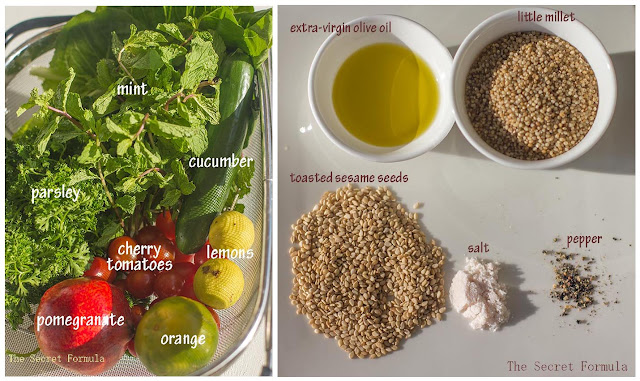 Mix everything together, toss well,  and serve immediately. 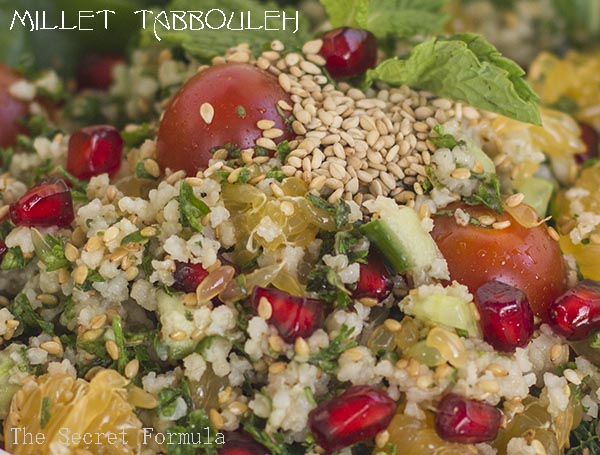 A delicious, colourful mix of fresh, soft, crisp and crunchy….. 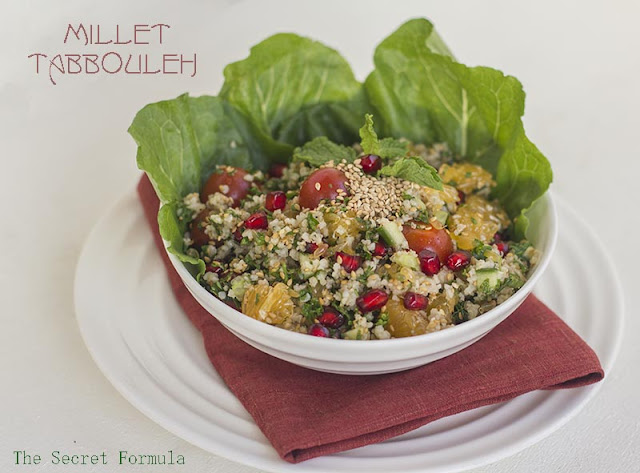 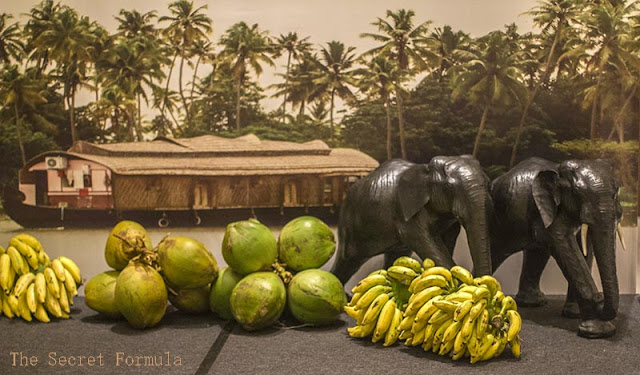 Just before the start of the Navaratris, I was invited to try the Malabar cuisine being showcased at the Sheraton Hotel, which I did after checking to make sure that there would be vegetarian fare as well.

I was not disappointed. Visiting Chef Gladwin Antony, from Le Meridien Kochi, ensured that there was plenty for everyone, the tastes were indeed very authentic, and there were many of the specialities from the Golden Coast featured. 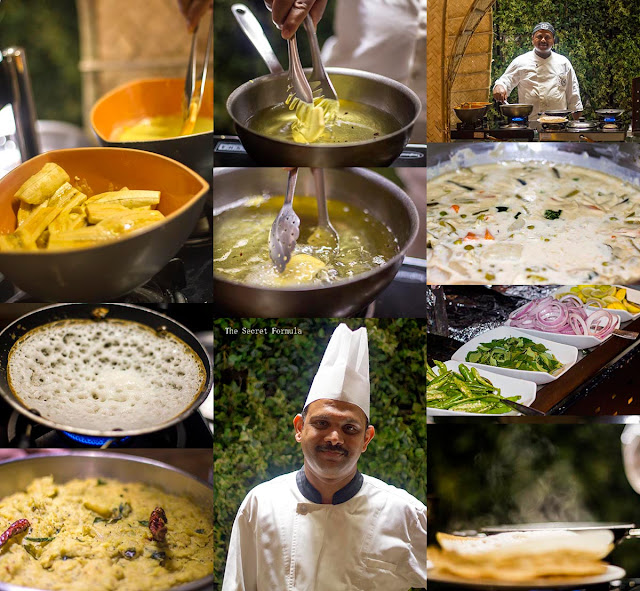 One of the interesting aspects of the theme was the decor in the restaurant. Many elements from the region were incorporated into the serving areas, the ceiling, the welcome area and live counters. 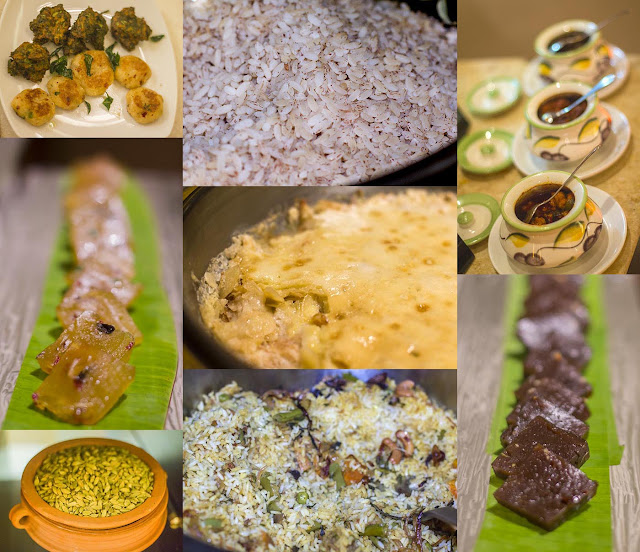 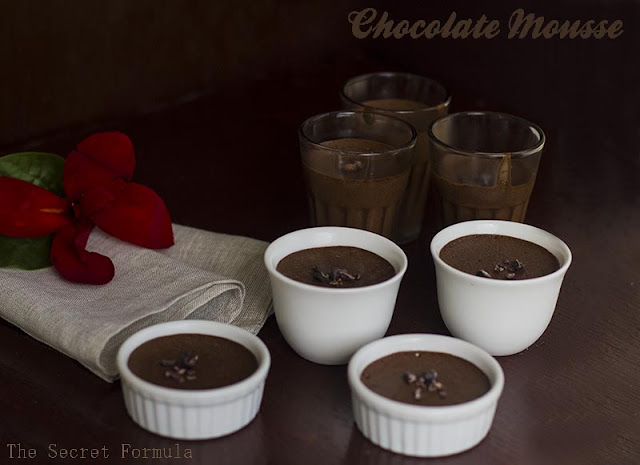 Made with just two, vegan ingredients. 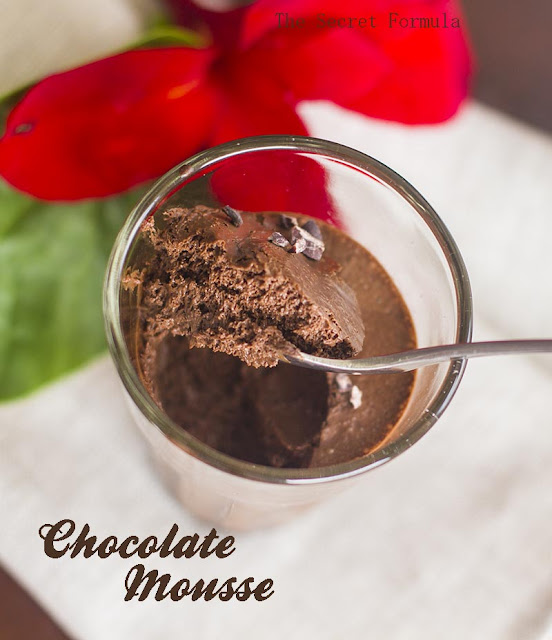 You see, I love chocolate mousse, but have never liked the ‘eggy’ ones, or the ‘gell-ed’, or ‘tofu-ed’, or ‘flaxseed-ed’, or other such ones, which somehow, totally lack the right texture of a good mousse.
So when I chanced upon this magical egg-white replacer called aquafaba a couple of months ago, this was one of the first few dishes that I tried out, and was thrilled to discover that it works so well.
Of course there’s always the even simpler and excellent option of just whipping together chocolate and water (gasp!).  What, you haven’t heard of Heston Blumenthal’s famous molecular gastronomy technique?! 😀
But there’s no such thing as too many good options, is there?! 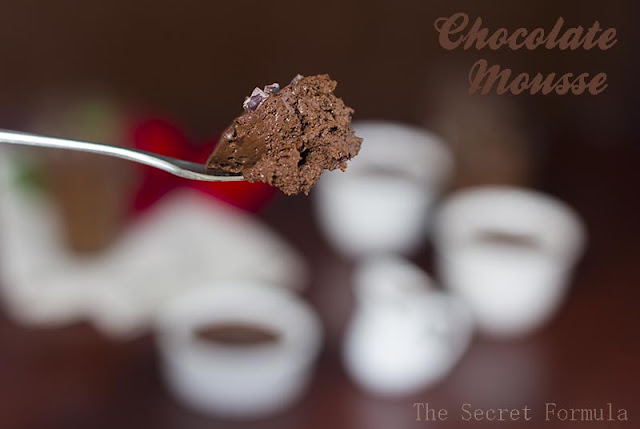 So, after having tried aquafaba (AF for short) in several bakes and dishes, I’m happy to report that the results are pretty good, though it’s not always entirely fail-proof.
Aquafaba (read it’s history here), is the liquid from cooked chickpeas, or kabuli chana, which is a fairly well known staple in my kitchen – hooray!

See here for how to make this at home.

Christened thus, because it is just “water (from) beans” or “aqua faba” in Latin, by Goose Wohlt (check out his blog) who propelled it’s discovery (after he serendipitously chanced upon a rather obscure video by a french chef and blogger Joël Roessel) along with an explosion of experiments in the vegan circles.
It works with many varieties of  pulses (beans, peas, lentils, legumes) with varying degrees of success.
Vive la good old ‘dal-ka-paani’ – yes, I’ve tried that too.

There is also a facebook group called Vegan Meringues – Hits and Misses which is a great place to discover more and share with other enthusiastic experimenters.

Next on my to-try list is the vegan mayonnaise. (Update: Here it is!)

Just remember, after visiting these sites, there will be a strong temptation to make too many dishes with sugar as the primary ingredient! You have been warned. 😉
(Recipe adapted from Miriam’s version at her beautiful blog, Mouthwatering Vegan.)
Ingredients (Just 2):
1. Aquafaba – 1/2 cup (around 125ml) (See here for how to make at home)
2. Fine quality chocolate – 100 gms, chopped.
I used 70% bittersweet couverture chocolate from Cocoacraft which is an excellent, local, Kerala-based single origin chocolate. Bournville is another vegan option, if desired. If not, try Lindt, or any good quality chocolate like Belgian.

1. Melt the chopped chocolate in a bain marie (or a dish placed over simmering water). 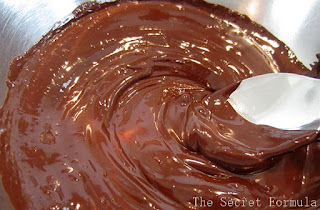 2. Whip the aquafaba till stiff peaks form. If using sugar, add in after soft peaks are achieved, and continue whipping till stiff.

3. Sacrifice Mix in a little of the precious foam into the melted, slightly cooled, chocolate…… 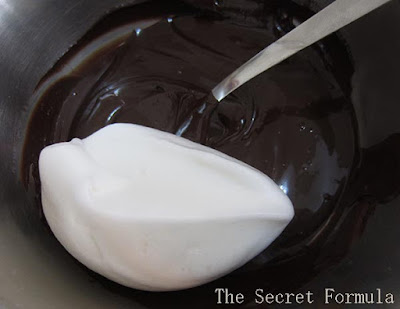 …to lighten it up for easy mixing. 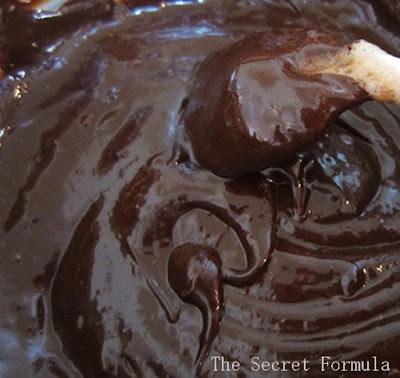 4. Then gently fold in the chocolate mixture by spoonfuls, into the whipped foam. 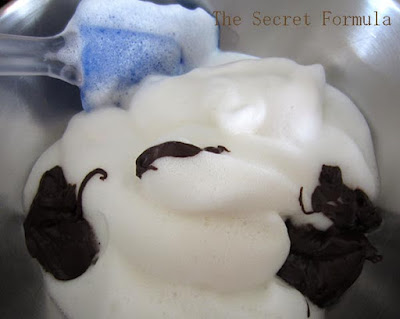 ‘Gentle’ is the keyword here. Though, if you would have noticed, the “stiffly beaten” foam is now already gone a bit soft. 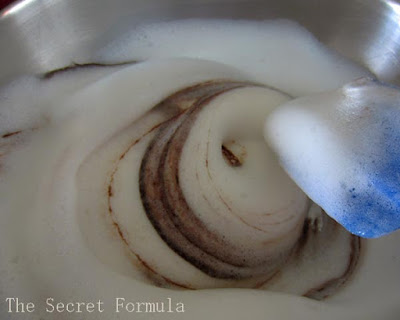 Whipped AF apparently does not ‘hold’ for too very long, especially without the aid of sugar, cream of tartar to stabilize it as in the meringues. (I was also multitasking with lunch-making on the side, and kept delaying all the steps, else I would have caught it in a stiffer, finer-bubbled stage when incorporating! 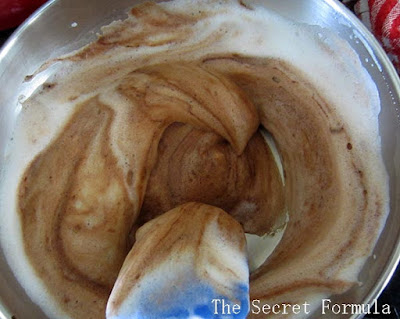 But not to worry, it still works fine for the mousse. The slightly larger air bubbles reminiscent of the “Aero” chocolate, though of course the taste – and even texture – can’t actually compare. 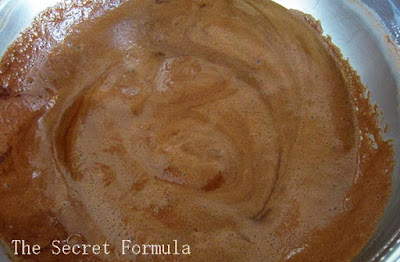 Pour into ramekins and chill until set.

Essentially, we’re just suspending air in the chocolate mixture and setting it in the fridge.
Once the chocolate is set, the light, airy texture remains, the foam was just a means of trapping the air into it before setting.

It sets beautifully with a smooth surface and a moist, fluffy texture beneath. 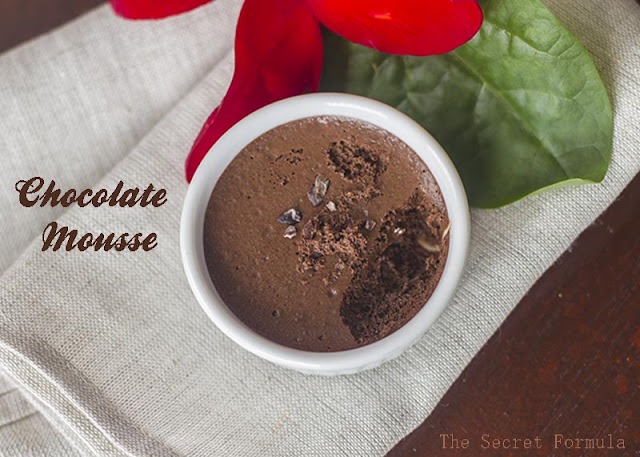 Well, I think this is just perfect as it is – with just a few organic cocoa nibs for garnish. 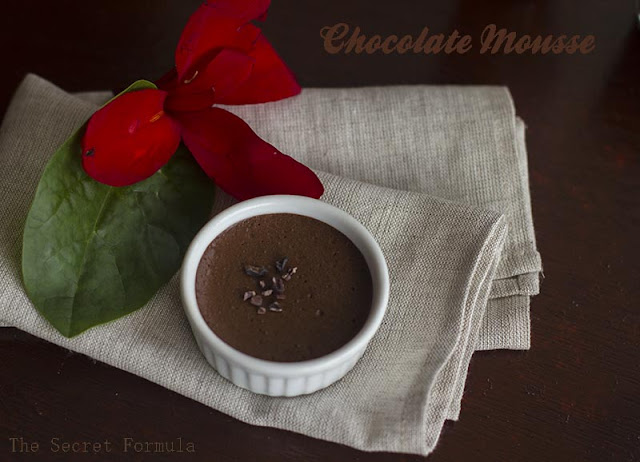 But the kiddos think there’s no such thing as too much chocolate goodness, and promptly whip up a chocolate sauce with jaggery, which gets poured on top of the mousse with good effect.

Quite delicious, with the sauce topping, too.

It was also tried with a dash of fresh whipped cream (not vegan, that) and approved. Picture could not be taken because they are fast disappearing. A good sign, it indicates success. 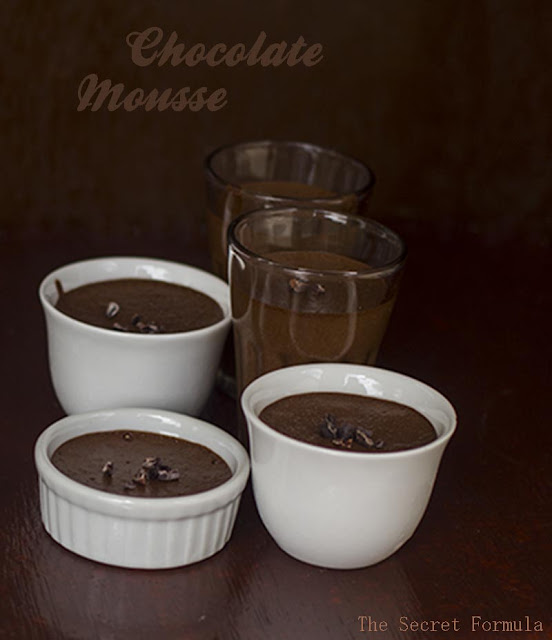 The great thing about this mousse is that it brings out the clean, pure chocolate flavour in a delicious, airy texture with none of those distracting tastes getting in the way, which is what happens when you have those other additives like cloying dairy cream, or eggs, or gelatin/agar, or tofu, or chia/flax, or nuts or coconut and what not. 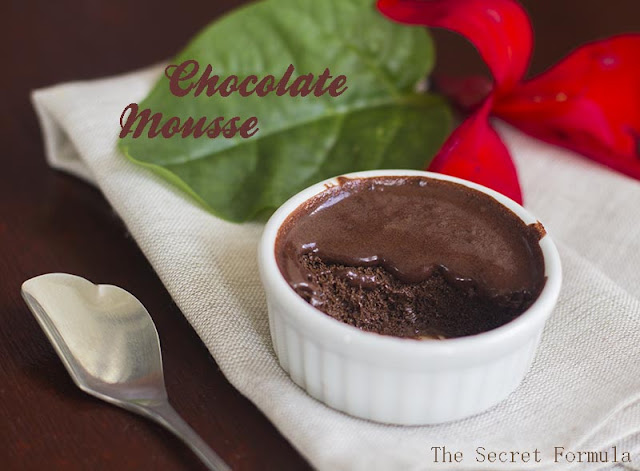