From the ginger plant family, Zingiberaceae, hail two plants which give us those well-known rhizomes so famous for their culinary and therapeutic properties – Ginger and Turmeric (did you know they’re related?).

Besides these, there is a third one, not as famous, but quite delicious in it’s own unique way, called Mango Ginger (or Aam Adrak), which looks deceptively like regular ginger, but is more closely related to its other cousin, Turmeric. It is, in fact, referred to as “White Turmeric” or “Mango Turmeric”  in some of the Indian dialects.

The family list is longer, with Galangal, Cardamom (the seeds in this case, not the rhizome) among other notables belonging to it as well, but more on those later.

Ginger is pretty much a common and everyday spice in our house. I can imagine nearly everyone would know its use in at least one home remedy or the other, besides as a spice in food or beverages.

The mature rhizomes tend to be a bit fibrous. It is usually scraped or peeled before use, then generally either chopped fine, julienned, grated, or ground into a paste, the last often along with other spices.

Sonth or dried ginger, pictured below, is also quite widely used. 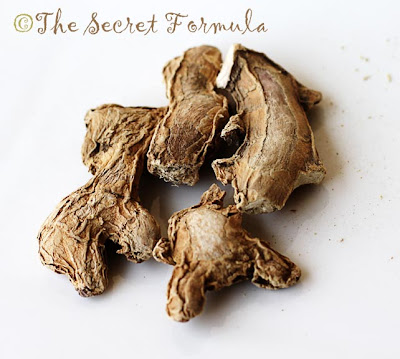 Dried ginger tends to be somewhat light and cork-ish in texture.

In the picture below, the broken pieces and rough powder on the left side are what I made by pounding the above dried Sonth in a mortar and pestle. It will thereafter be ground fine in a mixie jar.
The powder on the right, is a readymade, commercial one.  It is quite easily available in the local markets. 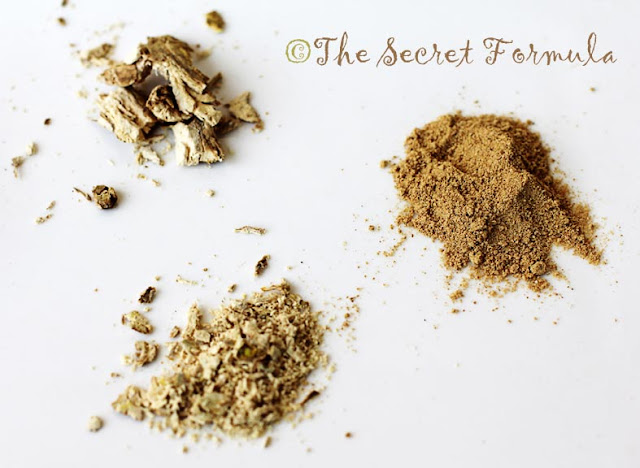 Sonth can replace fresh ginger in many cases, (and will possess quite a few of the same medicinal properties as fresh), but the flavour is somewhat different.

Mango ginger, on the other hand, is not a good substitute for ginger, as it tastes very different.
Fresh rhizomes are usually available in season, but might need to be sought out.

Can you tell the difference between the two types of ginger below? 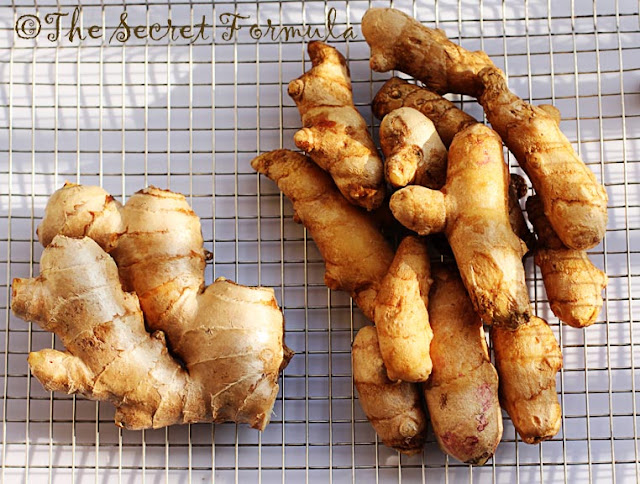 The one on the left is the regular ginger, and the one on the right is Mango Ginger, or Curcuma Amada.
Not quite as sharp-tasting as ginger, it has a distinct, though mild, flavour of raw mango.

It is also not as fibrous, nor as ‘claw-like’ in appearance as regular ginger. In fact, other than in colour and taste, looks more like turmeric.

Here they are, sliced CS, LS and all.

And here are some fresh rhizomes of Turmeric, pictured below. Another genus of the same plant family, also well known for its culinary and therapeutic properties.

Mostly used in dried, powdered form, as below, right .  Dried turmeric is quite hard, much harder than dried ginger.

Although the dried powder is the most common form of usage, if available, fresh turmeric can be used too (grated or chopped).

An easy way to get rid of unintended yellow smears on clothes or plastic-ware that won’t wash away,  is to expose it to the sun for a few hours, since it is fugitive to sunlight. 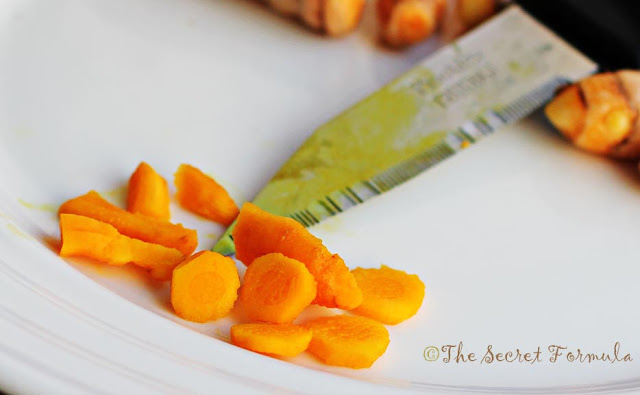 If you have any of these fabulously golden yellow rhizomes on hand,  try this delish relish with just grated turmeric, chopped green chillies, plenty of lemon juice and some salt. Pungent, loaded with medicinal and nutritional value.

A similar recipe is good with the two gingers as well. It will keep for several days in the refrigerator.