This one is an Ugadi special! 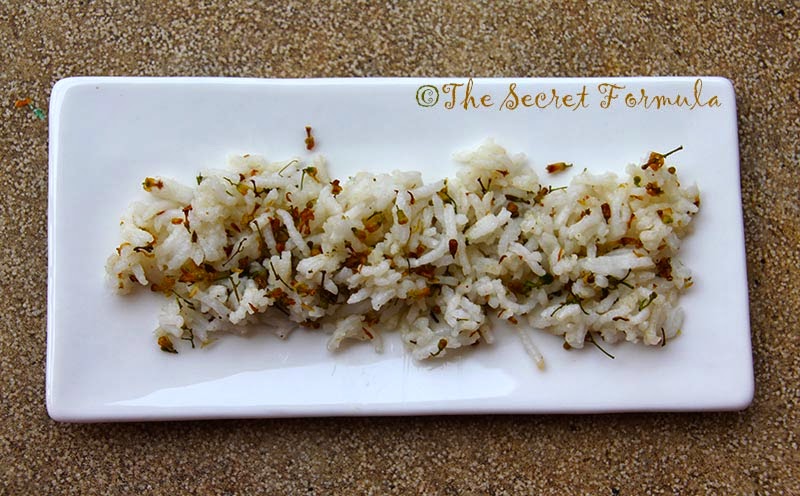 So what’s an hors d’oeuvre doing with an Indian meal? And therapeutic?!

Hors d’oeuvre (according to Merriam-Webster) refers to a food served in small portions before the main part of a meal, and which Wikipedia states is “often meant to be eaten by hand”.

Though this might not be quite what the French meant, it is exactly that.

Neem flower is the first in a series of an amazing variety of combinations with various ingredients that are mixed with rice and eaten right at the beginning of a meal (in this case an Andhra meal).
Of course, in a typical Andhra meal everything is mixed with rice.
But, these ‘starters’ are often not very well known, because they tend to be in the category of “Home Remedies”, though just as likely to be eaten as appetizers.
Such combinations would be informally mixed up according to need or appetite and to suit an individual’s specific requirement, for example the administration of carom seeds for an upset stomach.
There are many variations, but typically, tend to be a spice (either whole or powdered) which would be fried gently in a little bit of ghee or oil, salted and mixed with a bit of rice (sometimes with a further drizzle of ghee or oil) and eaten in small portions, like one or two tablespoonfuls, and before any thing else.
The ingredient used would usually be one that aids digestion, or is otherwise known for it’s beneficial properties in some way or the other.  Since it is the first thing to be consumed, it gets a head-start in its therapeutic work, as well as sets the stage for optimum digestion of the meal to follow.
Neem flowers are seen in profusion during the festival of Ugadi, the Telugu New Year. They are used in  a symbolic dish called “Ugadi Pachadi“.
Invariably there will be some of the spare flowers left over after making this pachadi, something I look forward to, because then I get to make this very exotic, deliciously bitter dish that I wouldn’t mind as the main course!
Note: Most of the following pictures are closeups (nearly four years old; that’s when I meant to originally write this post!), so to get an idea of scale, please refer to the first picture on top where the grains of rice would give an indication of the actual size.
Procedure:
Take some fresh neem flowers. Sometimes the very tiny, tender young leaves which are red in colour, are also used.
Remove the thicker stems.
Wash. 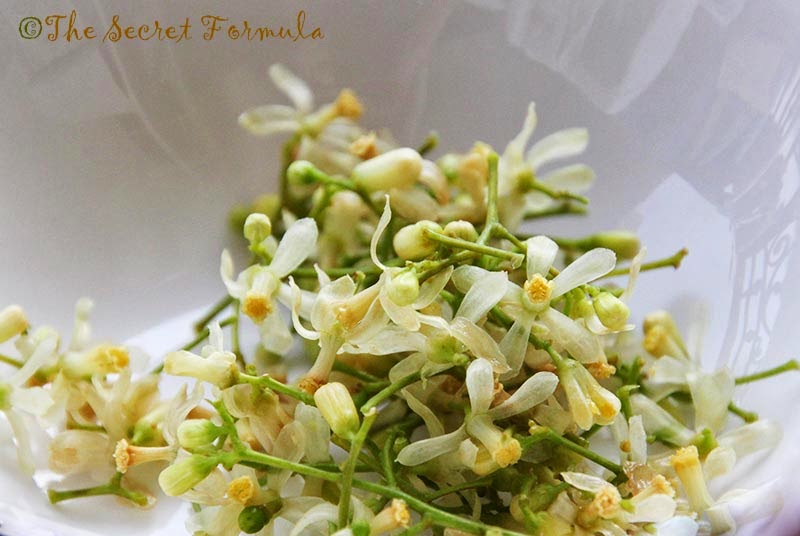 Heat a half or one teaspoon or pure, organic ghee, or a good oil like cold pressed organic sesame oil, add the flowers and fry till lightly browned, and 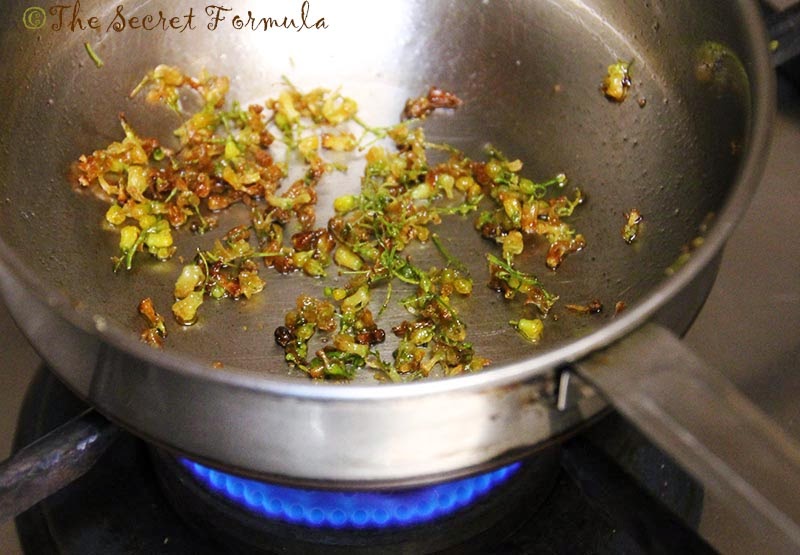 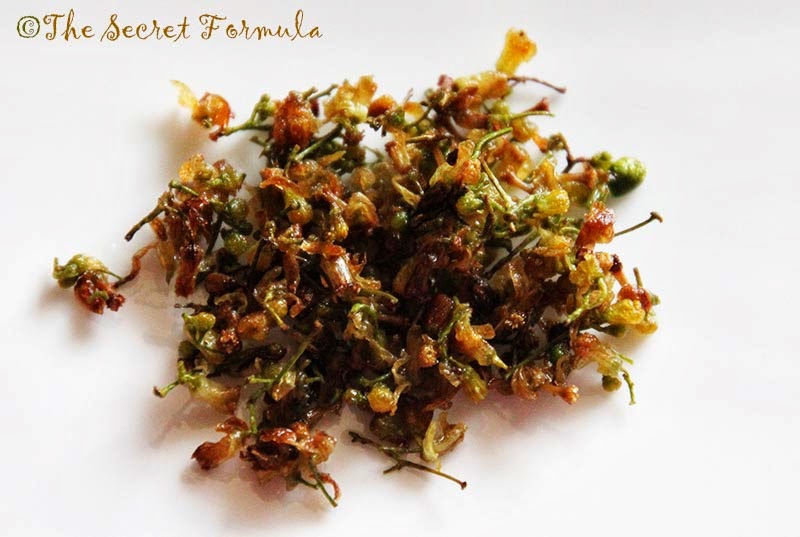 Add salt to taste and mix well with hot rice. 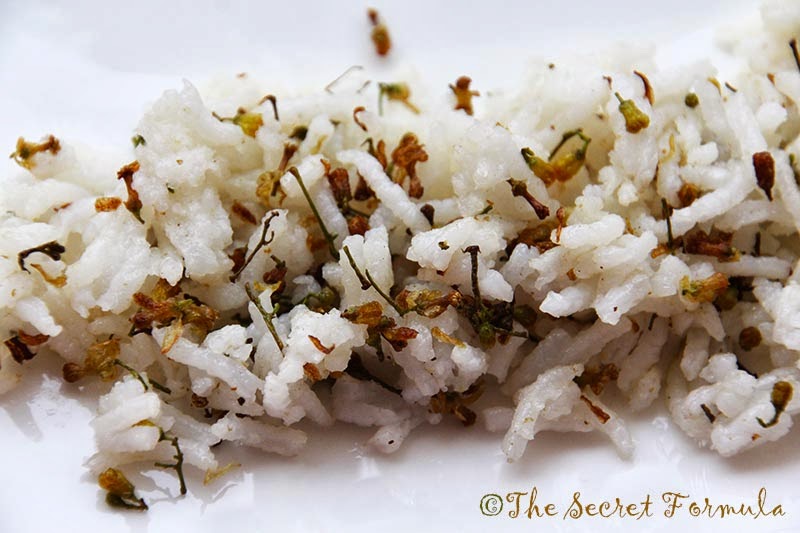 Serve hot, at the start of the meal. 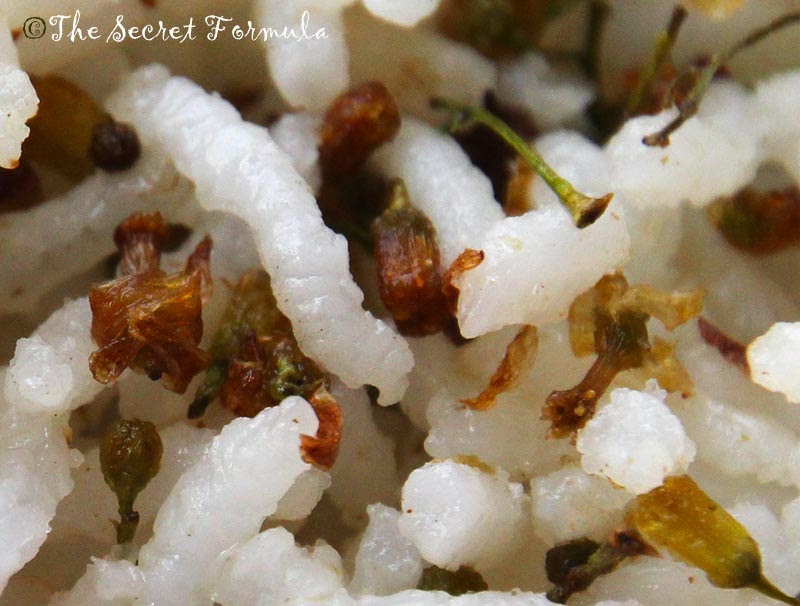